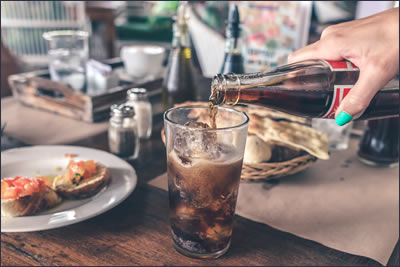 Diet drinks are supposed to assist with weight loss but are they actually doing the opposite?

Diet drinks are advertised as a healthier alternative to their sugar and calorie-laden counterparts, and they may be especially appealing to people wanting to lose weight.

However, years of research suggest that diet drinks are not the waistline-friendly choice that they're made out to be. Diet drinks not only offer no nutritional value but also low or no-calorie artificially sweetened beverages like diet cola may harm your health in various ways.

One study in 749 adults found that the waist circumference gain of people who consumed diet soda daily was nearly four times greater than non-consumers over a 10-year period. What's more, artificially sweetened beverage consumption has been significantly associated with overweight and obesity.

There are several ways in which diet drink consumption may lead to weight gain and other negative health outcomes. For example, the artificial sweeteners concentrated in diet beverages may lead to increased hunger and intensify cravings for higher calorie foods. Artificially sweetened drinks may also interfere with weight regulation mechanisms, disturb gut bacteria balance, and alter blood sugar regulation.

Plus, people who regularly consume diet drinks are more likely to have poor diet quality and eat fewer fruits and vegetables than those who don't drink them.

Although having a diet beverage once in a while is unlikely to significantly affect your health, it's best to reduce your intake of artificially sweetened drinks as much as possible. If you're used to having several diet drinks per day, slowly start replacing them with sparkling water, either plain or flavored with slices of lemon or lime. Giving up or greatly reducing your intake of diet drinks can be challenging, but it's the best choice for your overall health.