Why Drink Water with Your Meals? 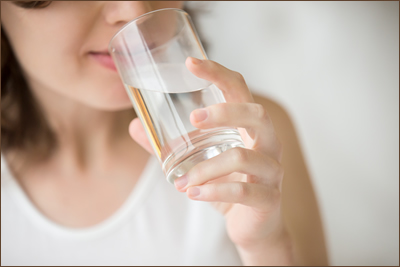 We tend to pay a lot more attention to what we eat than what we drink. We usually decide on a beverage after we’ve decided what we’re going to eat.

But there are times when the beverage calls the shots. Pour yourself a glass of cold milk and you’re suddenly craving a chocolate chip cookie. A steaming mug of coffee brings on the urge for a sugary donut on the side. And is there anyone who hasn’t noticed that beer pairs really well with salty, fatty foods - like pizza, hot dogs and peanuts? Okay, so if certain beverages can steer you to eat the wrong foods, is it possible that other beverages could help you make better choices?

Findings from a recent study suggest that having water as a beverage might improve our food choices at meals. The researchers performed two very simple experiments, designed to figure out if certain food-beverage combinations are preferences that we develop early on.

First, the researchers surveyed 60 young adults to get their thoughts on various food and drink combinations. And the findings were clear: soft drink goes great with pizza and fries, but it’s a lousy drink when you’re chowing down on raw or steamed veggies. Those foods, they said, call for water.

In the second study, 75 preschoolers were offered a snack of raw carrots and bell peppers, which were served on two separate occasions with either water or fruit punch. Not surprisingly, the kids drank more punch than plain water – it’s sweet, after all. But the interesting thing was that the kids ate more vegetables when they were served water than they did when they were served punch.

The findings suggest that kids may learn very early on to pair certain beverages with certain foods (soft drink goes with fatty, salty foods, not with vegetables), and they carry those preferences with them as they grow up. It means that if you expose kids to the soda-salt-fat combo over and over throughout childhood, then every time they drink a sugary drink, the palate gets primed for the burger, fries and pizza that’s sure to follow.

And so, the authors said, if the beverage choice determines whether we do (or don’t) eat our vegetables, then maybe it’s time to think about the beverage first - since the right one could steer us to make better choices at mealtime.

It’ll surely take more than a one-two punch of veggies and water to knock out the childhood obesity epidemic. But if kids learn early on to associate healthy beverages with healthy foods, it might just encourage them to eat more vegetables – and that’s a great place to start.